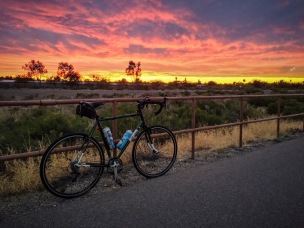 I bought a car last year (a 1993 Volvo that cost 700 whole dollars), and as a result, I haven’t been riding my bike hardly at all. Turns out I am really really lazy. I still think like a cyclist, though, and am always checking bike lanes and crosswalks for errant cyclists. I hope that I’m the driver that I wanted drivers to be, back when I was biking everywhere and trying to co-exist with car traffic. Anyway, I was going through a folder in which I had a whole bunch of half-written blog entries, and came across this, and figured I’d throw it out there:

As a cyclist, I hope that drivers can keep in mind that whatever their frustration with me—going slower than them, taking the lane, needing to cross three lanes of traffic in the span of one block so I can turn from 18th onto Larimer—I’m causing you perhaps 10 seconds of inconvenience. You have the power to KILL ME. Some people seem to think that cyclists think we’re invincible daredevils, and maybe some are (I can’t speak for all cyclists, obviously), but I am hyper-aware of the fragility of my meat suit whenever I’m biking in traffic. On the contrary, it seems like car drivers are the ones who are apt to forget their potential to injure and maim. I’m not saying that there’s not badly behaved, unpredictable cyclists out there—there’s about as many irresponsible cyclists as their are irresponsible pedestrians and irresponsible drivers—but when you, Mr/Mrs Driver Person, catch yourself about to lose your shit at some poor schmuck on a bicycle, please take a breath and remember you’ll be past them in ten seconds, it’ll all be over, and you can go about your day.

Some days it just feels like there’s no way for a person on a bicycle to win. And not just in a collision, where I am obviously going to be the loser. If I run a red light, I get yelled at for running it. If I don’t run it, I get honked at for holding up traffic. If I take the lane, I get honked at, never mind that the reason I moved left was to not get doored by someone lurking in a parked car, or because there’s gravel on the road, or because cars were blowing past me with barely a foot to spare and I wanted to force them to give me more space. If I stick to bike paths, I unintentionally goose pedestrians who are walking there; if I stick to the roads, I get yelled at and run the risk of getting plastered. It can be both dangerous and frustrating when all you want is to get home from work in one piece.

That said, it seems a shame that cyclists and cars so often let the bad incidents define the discussion. I ride my bike just about every day, and I have to say, my close calls and angry incidents are few and far between. So:

THANK YOU for pausing and letting me ride by when you’re trying to back out of your driveway.

THANK YOU for waiting to take your right turn and letting me go by in front of you, even though I was going slower than you thought I was.

THANK YOU for pulling a little to the left when you’re passing me to give me space.

THANK YOU for waiting patiently behind me at a light while I start from a standstill.

THANK YOU for stopping last week when I wiped out in the rain, and checking to see if I was okay.

THANK YOU for seeing me signal that I wanted to take a left and letting me cross the lane in front of you.

THANK YOU for when you who lift up your hand and let me know that you’ve seen me.

THANK YOU for pulling your dogs closer to you when you see me coming so I don’t have to worry about getting clotheslined (and I did slow down as much as I could so as to not scare your dogs, I hope that was okay).

THANK YOU to the kids who were waiting for the bus, saw me pushing my way up a steep hill, and started clapping and cheering–that was hilarious.

Thank you all for, so far, not killing me. Thanks to everyone who hasn’t thrown bottles at me, honked their horn for no reason, or yelled at me out a window. I do very much appreciate it.

Thanks. And let’s, when on the road, all just try to be patient with each other. Me included.

1 thought on “A Random Cycling Entry”