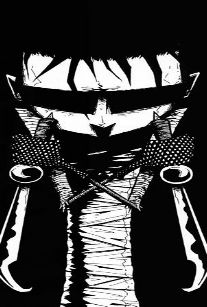 I wrote this in high school, fifteen or sixteen years ago, but found it recently. The comic book referenced throughout is this one, one of the first independently published comics that I ever got into. It’s wildly violent but also wildly funny and sad. I think I mostly wrote this essay to prove to some English teacher that I learned something from her class; I suspect she was not amused.

Point the First: There is only one tragic hero. Johnny is the only character in his world that is subjected to intense mental suffering. He inflicts suffering on others, but none of them truly understand the magnitude or implications of it; they just want to stay alive in as non-painful a way as possible. Thus, since they want to avoid pain, they also avoid joy. Most of the characters besides Johnny are self-absorbed and immature, and exist to drive Nny to the brink of psychological extinction. Nny is utterly alone in the world, with no one to alleviate his suffering or understand what he’s going through.

Point the Second: They are exceptional beings. Though not a nationally known politician or royal figure, Nny is noticed wherever he goes. He is hideously skinny, wears knee-high steel-toed boots, spiky hair, and has a way of looking at people that tends to creep them out and cause them to either ponder death or make fun of him. Not only are tragic heroes conspicuous, but they possess qualities which inspire awe or fear in others. They are made of the same stuff as us, only magnified and more intense. Johnny is the human embodiment of all our frustrations and anger. The waitress in the restaurant who spit in your food. The high school kids who taunted you. The driver who cut you off. What do you want to do to them? No, what do you really want to do? Johnny actually does it. Johnny indulges his demonic inner child.

Point the Third: The tragic story leads up to, and includes, the death of the hero. In Part 4, Johnny, after many failed attempts, finally manages to shoot himself in the head. This is ironic because he does it accidentally, immediately after he’s decided he doesn’t want to die (ohhh, irony, another lesson from high school English). In Part 5, he actually dies, and in Part 6, he goes to the afterlife and discovers he belongs in neither Heaven nor Hell, and gets sent back to Earth.

Point the Fourth: The suffering and calamity are exceptional. Throughout the comics, Nny does hardly anything but suffer. People make fun of him for how he looks. He has no friends. The Psycho Doughboy and Mr. Fuck torment his mind. He has to keep the wall coated with blood so nothing comes out. The ice-sucky machine gets turned off at 2:00am. He disembowels people, pulls their arms off, crushes their skulls, and stabs them with sporks (while listening to Beethoven). His head is blasted into pieces. He tries to kill the only woman who seems to have a chance at making him happy, because he can’t get happy lest it all come crashing down. About the only benign presence in the comics is Squee, the small neighbor boy that Nny tries to help but ends up terrorizing.

Johnny’s suffering is so much more calamitous not because events are out of his control, but because of the exact opposite. He actively destroys anything that might bring him happiness, rather than have it ripped from him just when he starts to enjoy himself. “You don’t understand; I’m happy!!” he screams to Devi, the only girl who treats him like a human. “I can’t let you go, we’ve begun something lovely, and, as with all things that start, it, inevitably, ends! The beginning is always so fine!! But decay soon follows, a degeneration into the tired old situation. The rot sets in.” (JTHM, Part 2).

Point the Fifth: The catastrophe will be of monumental proportions. The basic formula for tragic heroes, particularly the Shakespearean variety, is “Humpty Dumpty sat on a wall, Humpty Dumpty had a great fall.” Humpty starts on high—a man of rank, often of royalty, and then he falls as low as you can go—specifically, dead. Johnny’s tragedy is not so much where he starts out as it is in the total and utter depths of his fall. You would think that you can’t get more monumental than dead, but Johnny isn’t allowed to stay in Heaven or Hell—even in death, he belongs nowhere.

Point the Sixth: Shakespeare’s tragic heroes are responsible for their own falls—they have a tragic flaw. We’ve already discussed how Nny destroys anything and everything that might make him happy or, at the very least, lessen his misery. Much of his pain is the result of his refusal to take a chance at being happy. Johnny also pulls the trigger of the gun that kills him. Johnny’s tragic flaw is that he grows so obsessed with being unhappy. He kills hundreds of people in gruesome ways, and all he feels is the desire to kill more, as well as despair and guilt that that the killing will never stop. He writes in his diary, “You seem to be enjoying yourself. Quit it.” (Part 3) What makes Johnny great, his intelligence and clarity, is also his undoing, driving him to insanity, murder, and eventually suicide.