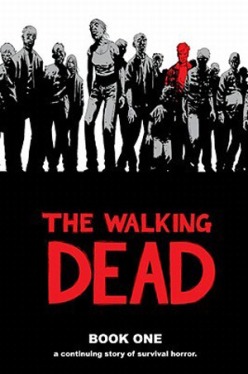 I first reviewed this book on my Goodreads account over here.

I should probably clarify at the outset that I have never seen a zombie movie in my life. Nor a zombie television episode. Nor read any other zombie novels or graphic novels. I haven’t read Pride & Prejudice & Zombies. Needless to say, I am completely unable to place The Walking Dead within a larger zombie context. It is entirely possible that I will say something that someone experienced in zombie culture would not say.

“In a world ruled by the dead, people are forced to finally begin living.”

Days Gone By, compiling issues #1-6 of the Walking Dead graphic novel series, opens and closes with a gun battle, and sandwiched between are a lot of zombies. The apocalypse has happened. Society has crumbled while Rick Grimes, our small-town cop hero protagonist, was in a coma recovering from a gunshot wound. His town has been abandoned, and his family has disappeared. Days Gone By follows Rick as he tries to find his family and learn the basics of whatever it is that’s happening to his world. And, refreshingly, the story doesn’t pause for more than three panels to explain what’s going on, or what caused all the zombies. “All media shut down after a few weeks. I haven’t heard much of anything after that. If they found a way to stop it…they haven’t made it here yet. Those things are everywhere. Before they stopped broadcasting they told us to relocate to the bigger cities. They said they could protect us all there.”

And that’s basically all we know. All Rick knows.

Because it’s a collection of issues, the graphic novel follows Rick trying to achieve specific, smaller goals within the larger overarching story of survival. Finding his family. Working out how to defend himself. Gradually building tensions between the surviving characters. I tend to read graphic novels really quickly (so quickly that sometimes the finer points or moments of emotional impact sail right by me), and some of the character tension stuff I didn’t really care about, but The Walking Dead did have an effect on me by the very end, and I could hear the little boy screaming inside of my head.

The graphic novels and the AMC television adaptation have, as most people know, gotten really popular. If you’re into zombies, I expect you’re way ahead of me and have read all the comics and watched all of the episodes. However, if you’ve been avoiding the series because you’re not a zombie person and don’t like zombies, you might want to give The Walking Dead a shot. I’m not sorry I did (but I still probably won’t watch the TV show anytime soon).