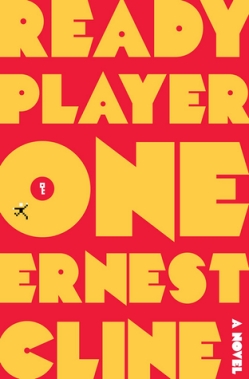 I first posted this review on my Goodreads account over here.

If you were born into a more-or-less average American family after about 1976 or so, you probably grew up playing some video games and/or watching movies. If you’re me, you still know how to get to all the secret worlds in Mario, you can beat Zelda in less than two hours, you can quote Monty Python and the Princess Bride, and you spent an inordinate amount of time dying of dysentary somewhere in Nebraska trying to get to Oregon. And I don’t come anywhere near being able to be called any sort of “gamer.”

But still. It’d be nice if your abilities in moving from left to right and jumping on the heads of koopas and goombas had some practical application now that you’re an adult, right? Something to tell you that your childhood hours had not been wasted.

Ready Player One, part dystopian-future science fiction, part treasure hunt, is that justification. Set about forty years in the future, the richest man in the world–who earned his fortune designing and programming the most popular video games the world has ever seen–has died with no heirs. He has planted an “Easter egg” somewhere in one of his games. The person who finds the egg inherits his fortune and his company. But even though it’s set in a dystopian future, Ready Player One feels familiar, because the hunt for the Easter egg takes us to the lonely billionaire’s 1980s childhood (which, of course, is also my childhood). Arcade games, John Hughes movies, Star Trek, Star Wars, Family Ties, Atari consoles, Pacman, early desktop computers. It’s a glorious, nerdy nostalia trip (and, if you take good notes, at the end you’ll find yourself with a formidable list of movies, television shows, books, actors, video games, and comic books to start reading if you want to up your nerd cred). I can’t stress how fun this makes reading Ready Player One. It was the most enjoyable aspect of the book for me–not by much, though, because the treasure hunt aspect of the plot is cleverly (possibly ingeniously) conceived. Just when you think you know the pattern that the clues are going to take, Cline changes direction on you, throwing bombs (sometimes literally, sometimes figuratively) in front of his characters to make sure that the hunt cannot proceed in a straight line. The book may end up in the place where you expect, but what is unexpected is how it gets there. And all the time, you’re rooting for narrator Wade–a sweet, funny, depressed, smart, overweight, hopelessly outmatched 18-year-old as he searches for the egg.