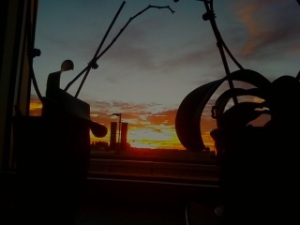 I was listening to an episode of Fresh Air recently wherein Terry Gross interviewed Louis CK, mostly about his TV show Louie and his recent Beacon Theatre performance. It included a clip from the TV show, depicting a confrontation between Louis and a suicidal friend of his. The friend demands that Louis give him a reason to live, if Louis is going to try and talk him out of killing himself.

“No,” says Louis, “I got my reasons to live. I worked hard to figure out what they are. I’m not just handing ’em to you. You want a reason to live? Have a drink of water and get some sleep, wake up in the morning and try again like everyone else does…You know what, it’s not your life. It’s life. Life is bigger than you.”

Most of the time, we just sort of drift through the day to day, taking care of tasks and running errands and doing the things we need to do to remain alive and fed. But it’s worth stepping back, every now and again, and evaluating just what the hell it is you think you’re doing, and why. Especially when you’re coming out of (or think you’re coming out of) a depression that paused more or less everything in your life for almost two years. One of the problems with depression is that, in trying to hard to get yourself well, you do all kinds of things not because you want to, but because you feel that you should. You no longer go to parties or concerts because you want to or because they’re fun. You go because you recognize that these activities were fun once upon a time, so clearly, to continue to do the things that you once enjoyed is good for you. And even if they no longer bring you joy–even if you end up sitting in the back of the music hall crying for reasons you don’t understand and hoping that nobody notices or tries to talk to you–certainly, staying home isn’t going to make you better. Watching entire seasons of The Biggest Loser in one go and not getting out of bed for entire days clearly isn’t good for you. Compulsively playing Solitaire on your iPod isn’t good for you. Failing to sleep and not finishing school assignments isn’t good for you. So you force yourself to do things that are good for you. Fake it till you make it, right? You can act your way out of depression, right? If you keep doing the things that you used to love to do, someday they’ll regain their magic.

I don’t want to jinx myself. I think it’s finally getting better. I have a new job (well, two new jobs, which will hopefully someday be one complete job) with people I like, that pays almost enough to live off of, and sometimes I will pause and realize I’m enjoying myself. It’s like the first deep breath you take after an asthma attack, or after holding your breath underwater for too long. Or riding my bike and realizing I’m having fun. Feeling proud of myself after I’ve ridden for 20+ miles. Do you know the last time that I felt proud of myself for something? I don’t either. And sometimes I catch myself hanging out with friends and realizing that they do, in fact, want me around.

And oddly enough, that’s enough for now. Those single breaths where I feel okay. At the end of everything, it really doesn’t take much, finding your reasons to live.