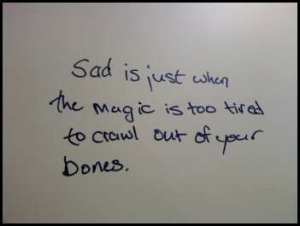 born to lose, i live my life in vain
all my dreams have only caused me pain
all my life i’ve always been so bluuuuuuuuuuuue
born to lose and now i’m losing yooouuuuuuuuuuu
–The Bouncing Souls

The world is so full of stories of happily-ever-after. Our current culture really doesn’t tolerate stories of despair; Shakespeare would never get into the Writer’s Guild of America if he was alive today. I was listening to Radiolab the other day (I’ve been re-listening to a lot of old episodes, in my general efforts to keep myself around things quiet and nurturing), the episode on Space, which includes the story of the sound recording sent up on the Voyager spacecraft and (tangentially) a story that Ann Druyan tells about falling in love with Carl Sagan and marrying him during that process of putting the Voyager together. They got married practically before they ever even kissed each other. How bewitching, how enticing is a story like this? Everyone wants to have that, and it’s so easy to convince yourself that this is what you have. You don’t want to be the person that drives across the southeastern United States in adult diapers to chase after someone who doesn’t love you, no, you want to be the person who professes her love and accepts a marriage proposal all in one breath. We tell ourselves all of these stories, and because we know that they are true, we forget that they are not the only stories out there. You craft fairy tales out of nothing. You forget that most of the time, it doesn’t work like that, that the world is littered with the dust of billions of broken hearts. The world doesn’t owe you any fairy tales.

I’ve been struggling with this, lately. I’ve wanted to move to New York since I was 14, and I think I thought that when I move here, I’d be happy. I thought that if I got a boyfriend, I’d be happy. It’s been hard on several levels, to move here and be so unhappy. I forgot that New York doesn’t owe me happy (not that I expected happy to show up at my apartment door with a welcome gift basket, I know that you have to create your own happiness, or at least create opportunities for happiness to happen, but you know what I mean). Having this idyll of New York in my head doesn’t obligate New York to adhere to that conception. And having the drought of romance that I had doesn’t mean that the universe owes me a boyfriend. Just because I really liked this guy doesn’t mean he’s under any sort of karmic obligation to like me back.

I know all these things, and yet I don’t know them. I have to keep learning them.