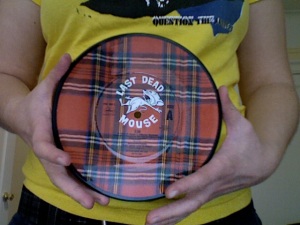 Step right up, ladies and gents
The last dead mouse costs fifty cents
It’s a steal at any price,
Gone once gone once gone once gone twice.
Half a buck, last in stock
Be the first one on your block.
No need to walk, no need to feed, satisfaction guaranteed.
–Mighty Mighty Bosstones, “Last Dead Mouse”

Because my friend Xtine just scored one of these, before I talk about more Bosstones full lengths, I will take a moment here to talk about the most coveted piece of Bosstones memorabilia: the “Last Dead Mouse” 7”.

So the disc (yes, I have one, that’s a photo of it at the top) is plaid.  It is very pretty.  Nobody knows exactly how many were pressed (well, I’m sure the Bosstones do, but they’re not saying).  They were promo material given away to radio stations.  Sometimes I think about them floating around out there…I’m sure plenty of people took them home from the radio station and sold it, or kept it, or forgot about it.  Maybe there’s some radio station out there that still has a cabinet of 7”s somewhere, and a forgotten LDM is inside.  I know some of the Bosstones have some.  I’m sure plenty have been thrown out over the years.  For as long as I can remember, they hardly ever show up on ebay, and when they do, they go for a minimum of $100 (usually more).  I think I know three people with a LDM 7”.  And one guy who owns five, but we don’t like him very much.  I can’t entirely fathom why these records were even made–”Last Dead Mouse” was never, as far as I know, a single off of the Don’t Know How to Party album.  It’s certainly not the best song off the album and it’s not (and hasn’t been for a long time) a song they play live very often.  But there it is, together with another semi-random B-side (“Every Trick in the Book”), and because of its scarcity (and because Bosstones fans are insane), it commands a higher price than other records that are much, much more famous.

It’s a little ironic to me that a song that is about the stupidity of mass consumerism and snake oil salesmen became the most sought-after Bosstones item out there.  The narrator of the song is a guy who believes he can sell anything to anyone (“Last dead mouse but I’ll get more! I’m a businessman and an entrepreneur. Folks say that I’m nuts, they can say what they please. You have to be crazy with prices like these.”)  People will buy anything, be they dead mice, or Last Dead Mouse.

The thing about the Bosstones is, if you’re aware of them, if they’re in your orbit, they are often a major force in your life.  But if you’re unaware of them, or if all you know is “The Impression That I Get” (their one major “chart hit”), you probably know next to nothing about them.  They don’t get a lot of press, especially these days.  And they’ve never really been the cool band to like.  You sort of have to know where to look for them.  So that they inspire such dedication and collector-glee comes as a surprise to a lot of people.  Surely, a band that people are willing to follow around the country on tour is a band that everyone should have heard of, right?  But somehow that’s not the case with the Bosstones.  Nobody understands Bosstones nerd-dom other than other Bosstones nerds.  It’s like Louis Armstrong said about jazz: “If you need it explained to you, you’re never going to get it.”

The story of my LDM 7”: One of my fellow Bosstones nerds, Eric, bought a pack of goodies from Joe G (Bosstones bass player) a year ago, to benefit victims of the Haiti earthquake.  As a surprise, one of the things Joe included in the gift pack was a Last Dead Mouse 7”.  (Free LDM?  He’s a lucky sunnuvabitch.)  Fast forward a year, and Eric wants to buy a personalized Flyers jersey for his dad, who’s turning 70, and who Eric is taking to opening day (baseball season opener, that is).  So he’s selling his LDM 7” to pay for the jersey, and somehow I was the one in the chat room when he offered it up.  So I snatched it.  I like that my LDM has a story and that I know what the story is.  He’s glad that the LDM went to a good home, and I’m glad that I got to help him take his dad out for a good birthday.  And I’m happy to have this beautiful (and coveted) record.