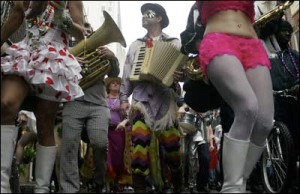 a few weeks ago, a friend of mine told me that to celebrate the release of the first season of the HBO series Treme on DVD, HBO had sponsored a New Orleans-themed food truck and brass band to stop at certain areas around the city and give stuff away. cast members were signing autographs. what a perfect reason to not do homework.

i assumed–and my friend who told me about it assumed–that “New Orleans treats” mean, well, New Orleans food. i reached that assumption based on the tradition of NY food trucks and the meals you can get from them; or even the food trucks at the New Orleans Jazz Fest (it’s outside, so everything is moveable, one way or another), or the nuns who sell jambalaya in the church parking lots at mardi gras. new orleans food is street food. it’s community food. you can dress it up and charge $30 a plate for it in some swanky french quarter restaurant if you want, but as far as i’m concerned, new orleans food is meant to feed everybody. at jazz fest, you pay $3 or $4 for a plate full of sloppy deliciousness, a couple of bucks for a cold beer, and you sit on the grass next to whatever stage you feel like, listening to music and eating hot food.

everybody but me can see the disappointment coming from a mile away, right? everybody but me has learned to not trust a corporation to be faithful to idyllic childhood memories, right? i should know that corporate america is not about plates of red beans and rice or foil trays full of fried chicken. corporate america is about flourescent nachos and microwaved pizza. warped tour and baseball parks. but still, i can’t entirely articulate the disappointment i felt upon being handed a single praline cookie and something that was called a king cake but sort of looked and tasted like a frosted pretzel. that is not new orleans food. that’s barely an approximation of new orleans food. a broadway props department could’ve done better than that. i wonder how wendell pierce (wonderful actor who played Bunk in The Wire, and who is also from new orleans) copes with it. he must have found some balance between the actual city he loves, david simon’s portrayal of it, and then HBO’s bastardization of it through the publicity process. publicity has to be the dirtiest part about being any kind of artist who makes things for public consumption (music, movies, TV), something that every artist has to somehow make peace with, but i honestly don’t have the first idea how they pull it off.

i know that no one sees new orleans (or new york or denver, for that matter) as i do. and i know that my conception of new orleans is sort of mythical and incomplete, since so much of it is informed by visiting it regularly, rather than living there. when i was a kid in suburban littleton, having family in new orleans was one of the things that made me different. i think it was one of the cooler differences i had (as opposed to the rest of them, which primarily just served to make me awkward and unpopular). as i’ve gotten older, my family history doesn’t make me unique any more. and often, i’m not the person in the conversation who knows the most about new orleans. there are a lot of people from new orleans, after all.

still, though, i think i’ve got a pretty good handle on the difference between Real new orleans and Tourist new orleans. and seeing a second line band wearing marching uniforms with “HBO” and “Treme” on them suddenly transported me to Bastardized new orleans, the new orleans that i’ve been afraid of ever since katrina, because i dont want new orleans to rebuild its buildings but lose its soul. it’s not just about whether or not the band is there. i don’t know what it IS about, but just having a brass band and king cake isn’t enough.