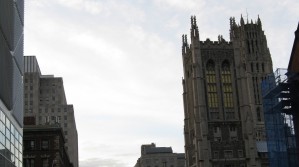 I lived in New Orleans for six months awhile back (and actually, I was born there, but we moved away before I developed any substantial memories of the place).  In Colorado, the primary trees on the Front Range and the plains are lodgepole pines and cottonwoods, tall skinny trees that reach upward.  In New Orleans, the dominant trees are oaks, which grow more or less at right angles–straight out and sprawling.  I love New Orleans for a lot of things, but the city really doesn’t have a horizon to speak of, unless you get to the rim of the bowl (on the shores of the Mississippi or Lake Pontchartrain, or to the top of the Industrial Canal bridge or the Huey Long).  It started to make me claustrophobic after awhile, to always have these trees looming over me.  The fact that this was six months after Katrina didn’t help at all.  It aggravated the feeling that there was no way to get out from under in case of disaster.

Colorado has the same wide horizons and big sky that Montana is famous for.  It has 350 days of sunshine a year.  It has, as the Dixie Chicks say, “wide open spaces.”  You can take deep breaths there.

I was worried about moving to New York.  New York doesn’t have trees, but it has buildings.  Buildings that block out the sun.  Buildings that form wind canyons.  Would I go crazy from never seeing a horizon?  From vitamin D deficiency?  Where would I go if I needed to see some sky?

One of my classes is in the Union Theological Seminary on Broadway and 122nd; to get there I walk by the northern end of the Columbia campus on 120th.  They’re building a new building at the corner of 120th and Broadway, since I’ve gotten here, there’s been scaffolding up over the sidewalk, and cranes and trucks and dozens of men in hardhats milling around, and those portable construction offices, and the noise of construction.  It’s a pretty congested pedestrian area.

And then one day, I’m walking down 120th to class, and I realize something is different.  I look around.