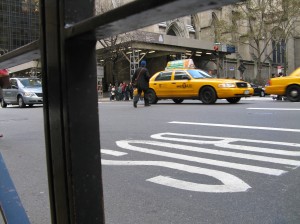 I saw a man break down on New Year’s Eve,
Drop to his knees and cry hysterically,
Screaming nonsense you would not believe on the sidewalk right in front of me.
And I asked him, “Mister, what’s the matter?  Calm down, are you all right?
You look like you could use a doctor, and how much have you had to drink tonight?”
–Mighty Mighty Bosstones

There’s a certain competitive edge to the sidewalks in Manhattan, or at least, I imagine that there is.  And not just when you’re stuck behind somebody that’s walking slower than you.  And it’s not just when you watch somebody veering toward you as they text and walk, wondering if they’ll see you before they crash into you.  It’s more the undeclared games of chicken.  I’ve been noticing them partly because I play them so often.  Who’s going to be the one to yield, and who’s going to do the “Hey!  I’m walkin’ here!” thing, other than me?  I’ve actually been body checked a couple times, because neither me nor the other guy were willing to change course.  Maybe I do it because I’m so much a doormat in other areas of my life, and this is one area where standing up for yourself and taking up space isn’t that hard to do.  Maybe it’s because New Yorkers spend so much of their time shuffling themselves around and adjusting their business to make space for others.  You get tired of it.  You want to take up space and get some air.  You want to walk in a straight line without anybody bothering you.  and it’s fine for me to be that kind of asshole as long as nobody else is–but it never works out that way, does it?