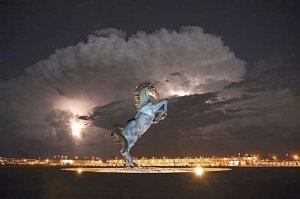 A few years ago (2007 I believe), Denver erected a large statue on Peña Boulevard, the highway that leads to our famously isolated airport.  It’s of a large blue horse.  If you haven’t actually driven by it to see for yourself, the word to describe this horse is “freaky”–you can see his ribs.  His mane is spiky.  His eyes glow red.  He’s also anatomically correct (something I didn’t actually know until I started researching on the internet).  Except for the fact that he’s blue, he brings to mind the verse from Revelations that goes, “And I looked, and behold a pale horse: and his name that sat on him was Death, and Hell followed with him. And power was given unto them over the fourth part of the earth, to kill with sword, and with hunger, and with death, and with the beasts of the earth.”

The horse’s reputation isn’t helped by the fact that it killed Luis Jimenez, the sculptor who created it (the various pieces were assembled in his workshop, awaiting assembly, and one came loose from its chains and crushed him).

I am not the most stunning analyst of visual art ever.  I tend to peg over toward the philistine end of the spectrum.  So my reaction to the horse tends to be one of merriment, because the horse (and the kerfuffle surrounding him) is kind of ridiculous, and I am amused by ridiculousness.  I love that the horse faces west–if you’re driving to the airport, you are greeted by his fiery eyes and his hooves trying to take out your Prius.  If, however, you’ve just flown into DIA and are driving away from the airport, you are greeted by the horse’s butt.  I love that New York City has the Statue of Liberty, greeting the tired poor and huddles masses with her inspirational crown and torch of liberty–and Denver has a giant blue demon horse that looks like it wants to eat you for breakfast.  New York City is the gateway to the land of opportunity.  Denver is the gateway to the land of many dangers, including marauding Indians, buffalo stampedes, saloon fights over homesteads and gold panning, locust plagues, Alfred Packer, and carnivorous horses–so watch your back.

I am also amused by the fact that the horse is so controversial (and will continue to be amused right up until its opponents actually get traction, at which point I’m going to go all First Amendment all over the place).  Look: if your biggest problem in life is that you can see the giant blue horse’s butthole, then you’ve got a pretty good life, that’s all I can say.

The Blue Debil isn’t amusing in and of itself (like I said, it’s frightening, even in broad daylight), but I also love where the horse fits in with the rest of Denver’s public arts pieces.  Denver is one of the few cities I can think of that dares to get whimsical, or have a sense of humor, about its public art.  Denver doesn’t really go in for public arts that are nondescript or abstract.  We have a statue of a chair that’s fifteen feet tall with a toy horse on top out in front of our library.  There’s a large statue of a broom and dustpan out in front of the art museum (which always makes me feel like I’ve gotten stuck in Honey I Shrunk the Kids).  There’s an enormous (and cuddly) blue bear leaning against the glass front wall of the Convention Center, and a pair of cows cast in bronze on 12th St.  Oh, and a giraffe cow.  There’s a certain amount of “Why yes, it is a tiny horse sitting on top of a large chair in the middle of the town square–what of it?” in the air, which isn’t a bad way to feel about your city, or about your art.  I can’t explain it.  I don’t need to explain it.  You don’t need to know the explanation.  It is what it is, and that’s all there is to it.  The horse is threatening, and weird, and enormous, and inexplicable, and vaguely disturbing.  So is life, if you haven’t noticed.  Get over it.