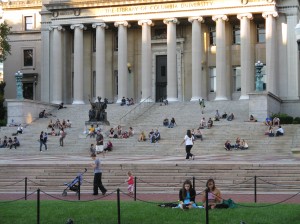 So at Columbia, I’m in the School of General Studies.  GS is a student body made up of atypical students, that is, basically anyone that’s an undergrad but not an 18-yr-old fresh out of high school.  People who just got out of a stint in the army, former Olympic gymnasts, people who are returning to college, or people (like me) who are going after their 2nd undergrad.  GS students are completely integrated into the Columbia student body, we aren’t really a unified group, so unless you know who they are, they sort of blend in.

I’m realizing that a lot of people think I’m younger than I am because they just don’t have a context in which to put me.  They assume I’m a 21- or 22-year old undergrad who has a mysteriously long work history and more stories than a 21-yr-old really should have.  I really should correct people, but it’s boring and repetitive to explain GS over and over again and why I am where I am, and besides, I sort of like being the mysterious person with the incongruous stories.  To a sheltered 18-yr-old, I am suddenly a really exciting person.  I don’t think I’m ever that person.

Last night, on a whim, I took the subway down to Washington Square Park to join a vigil for the queer youth who have recently committed suicide.  It was raining softly, so people were huddled together under umbrellas.  I hid under the arch and listened to a group of fags flirt and sexually harrass each other.  It was actually really funny.  One old queen who had a camera was sort of flirting with this gay boy, but also sort of being really condescending and ageist.  “Oh, honey,” he’d say.  “You bartend?  At which bar?  If it wasn’t popular 25 years ago, I’m just not going to even go there….You’re cute enough, but I’m sorry, you’re just too stupid.”  And the gay boy and his friends would laugh and harrass him back.

There was a moment of silence, and because of rain and fire ordinances, there were rainbow glowsticks instead of candles.  Somebody sang “Somewhere Over the Rainbow.”  I don’t know if there really are more queer kids killing themselves this fall, or if the media is just paying more attention.  Either way, it’s a sad state of affairs, and it’s sad that kids have to die before we break our silence.

I left when people started chanting for “Equal Rights Now!” Which is not to say that gays don’t need equal rights and protections–they absolutely, absolutely do.  But you could legalize gay marraige on a national level tomorrow, and it wouldn’t make a damn bit of difference to the kid in Buttfuck High School who’s stolen his father’s pistol and hidden it under his pillow, just in case.  Granting equal rights is not the same thing as granting compassion, and it’s not the same thing as making people safe, and it’s not the same thing as giving persecuted, tortured, depressed kids a way out.  I don’t think the two issues are unrelated by any means (I think the lack of equal rights is a reflection of, not a cause of, the lack of compassion and acceptance a lot of gays encounter), but at a vigil for dead children, put your equal rights on hold for just an hour, please.  Thanks.