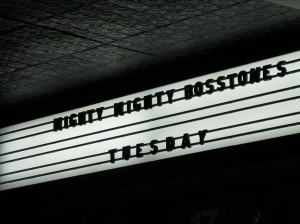 I’ve been to two concerts since I moved to New York: the Mighty Mighty Bosstones on Aug. 24th and the Street Dogs a week ago (oh, and H2O, on a boat, which was awesome).

Five years ago or so, I hurt my back.  The first time I did it was at work, lifting garbage into a dumpster; but the second time I did it was at a Bouncing Souls show, up against the railing, trying to hold my place against all the pushing and the crush that always goes on against the rail at a punk show.  The strain of standing there, apparently, was all on my back (which I didn’t notice, since when you’re up there, it doesn’t feel like you’re holding yourself up, it feels like others are holding you there).  It didn’t hurt right then, but at 2:00am I woke up (and woke my roommates up) with my back in spasm, screaming.  It was weeks before I could walk without leaning on somebody or something.

So that was the end of mosh pits for me, for a good long while.  When the Street Dogs came to town, I hung out near the back; when the Mad Caddies rolled through, I skanked in the back.  It was fun, and I didn’t wake up sore, but part of punk shows is the sweat and the contact and the exhaustion.  You don’t feel like you’re really a part of the concert when you’re hiding in the back, you don’t feel like you’re part of the experience.  Even long after the danger of re-injuring myself was past, fear kept me out of mosh pits.  I think I’ve been in two in the past five years.

But when the Bosstones rolled through, I decided it had been long enough.  Almost every other time I’ve seen the Bosstones, I’ve been up against the rail, singing along and watching the band.  Every time I see them, it could be the last time: I’m always very aware of this.  I don’t want the Bosstones to break up and realize that I’d never experienced a Bosstones pit.  And the NYC pit was going to be full of people I knew.  So, in I went.

I go to Buddhist meditation sometimes, and there they talk a lot about being aware of your body, but not holding it stiff.  Of non-attachment and non-aversion, accepting what comes for what it is, and not building a story around it.  Being in a mosh pit is like that.  Where you go in a pit is more or less where everyone else goes, to fight with the pit usually means that you’ll get hurt.  You have to just sort of let yourself go, relax, dance, don’t flip out and build a story about how this person is behaving or that person is behaving.  There’s no such thing as the rock that the stream of the mosh pit flows around, unless you’re 250 lbs.  Rocks get knocked over.  There’s no such thing as holding onto your patch of territory, your patch of floor.  There’s just the mosh pit.  Your individual self almost disappears, and it can be pretty glorious.  You get so used to other people holding you up that when the music stops, and the pit stops, to come back into your body, and to hold yourself up, is a shock.  It’s the closest thing to selflessness I’ve ever come, and that’s including years in Quaker Meeting and at Buddhist meditation.

At Street Dogs, I went the opposite way, I grabbed a spot at the rail.  To be on the rail–because you have the general goal of wanting to see and of wanting to stay at the rail–is almost the opposite of being on the pit.  Everyone wants the spot where you are, everyone tries to squirm their way in, to push you either off the rail entirely or at least toward the outside.  So you grab the iron and you hold on, you brace yourself, you make yourself that rock that’s so anti-adaptive in the mosh pit, and you’re hyper-aware of the possibility of crowd surfers crashing on your head.  It’s still fun, it’s an amazing place to be, but it’s a different sort of existence than being in the pit.  The tradeoff is visibility, to watch the band go nuts (and, with the Bosstones, watching Ben Carr dance is enormous consolation to not being able to dance yourself; in the Bosstones’ mosh pit I didn’t get to watch the band hardly at all because I was so focused on my immediate surroundings).

And then there’s the best part of punk shows, and that’s the people that show up to them.  Bosstones shows are always attended by substantial numbers of the 737, dancing and drinking partners extraordinaire; H2O and the Street Dogs I’ve seen so many times that now I get to talk to Toby, Mike, and Johnny after the shows, catch up on silly shit, hang out for a couple hours with people who feel the same way that I do about these bands.

The conclusion should go here, but I got nothin.  Fun, fun, glorious fun.