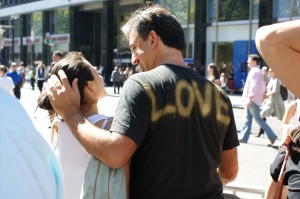 The following is an op-ed written by Karen Armstrong that appeared on the Huffington Post on Sept. 10.  The original can be found here.

The anniversary of 9/11 reminds us why we need the Charter for Compassion. It should be an annual summons to compassionate action. The need is especially apparent this year. In the United States, we have witnessed an upsurge of anti-Muslim feeling that violates the core values of that nation. The controversy surrounding the community centre near Ground Zero, planned by our dear friends Imam Feisal Rauf and Daisy Khan (who were among the earliest supporters and partners of the Charter) has inspired rhetoric that shames us all. And now we have the prospect of the Quran burning proposed by a Christian pastor, who seems to have forgotten that Jesus taught his followers to love those they regard as enemies, to respond to evil with good, and to turn the other cheek when attacked, and who died forgiving his executioners.

If we want to preserve our humanity, we must make the compassionate voice of religion and morality a vibrant and dynamic force in our polarised world. We can no longer afford the barbarism of hatred, contempt and disgust. At the same time as we are so perilously divided, we are drawn together electronically, economically and politically more closely than ever before. A Quran burning, whenever it is held (it appears to have been delayed for questionable reasons by the pastor behind it), would endanger American troops in Afghanistan and send shock waves of distress throughout the Muslim world. In an age when, increasingly, small groups will have powers of destruction that were previously the preserve only of the nation-state, respect and compassion are now crucial for our very survival. We have to learn to make a place for the other in our minds and hearts; any ideology that inspires hatred, exclusion and division is failing the test of our time. Hatred breeds more hatred, violence more violence. It is time to break this vicious cycle.

In response to the prospect of a Quran burning, some people planned readings of the sacred Quran. Others are organizing interfaith gatherings on September 11. Each person who has affirmed the Charter, each one of our partners and associates, will know how best to respond in his or her own community. It is an opportunity to protest against the hatred that is damaging us all; to sit and do nothing is not an option. Instead of looking at one another with hostility, let us look at the suffering that we are seeing in so many parts of the world — not least in Pakistan, where millions of people have been victims of the flooding. On September 11, let us all try to find something practical to do that can, in however small a way, bring help and relief to all those in pain, even — and perhaps especially — those we may regard as enemies. We are all neighbours in the global village and must learn to live together in harmony, compassion and mutual respect.

Imam Feisal Rauf is a Sufi. Over the centuries, Sufis, the mystics of Islam, have developed an outstanding appreciation of other faith traditions. It is quite common for a Sufi poet to cry in ecstasy that he is no longer a Muslim, a Christian or a Jew and that he is at home equally in a synagogue, mosque, temple or church, because once you have glimpsed the immensity of the divine, these limited, human distinctions fall away into insignificance. We need that spirit today — perhaps especially near Ground Zero. Here I would like to add some words of the great thirteenth-century Sufi philosopher Muid ad-Din ibn al-Arabi, which I have found personally inspiring:

Do not attach yourself in an exclusive manner to any one creed, so that you disbelieve all the rest: if you do this, you will miss much good; nay, you will fail to realize the real truth of the matter. God, the omnipresent and omnipotent, is not limited by any one creed, for He says, “Wheresoever ye turn, there is the face of Allah” (Quran 2.109). Everyone praises what he believes; his god is his own creature, and in praising it he praises himself. Consequently he blames the beliefs of others, which he would not do if he were just but his dislike is based on ignorance.

It is time to combat the ignorance that inspires hatred and fear. We have seen the harm religious chauvinism can do; now let us bear witness to the power of compassion.