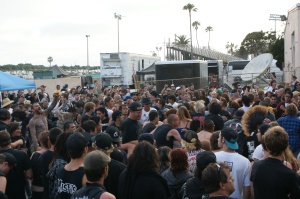 I spent much of the summer of 2010 following the Warped Tour in my car.  I kept a blog about it, certain entries of which I’m going to migrate over here.  This entry is from July 15th, after the Hartford, CT show (which was also the show which ended in my car getting towed, which was the beginning of the end for my adventure).

So I keep trying to like the All American Rejects. I’m not sure where this feeling of obligation comes from. I keep watching the first two songs of their set, getting vaguely bored, and before I realize it I’ve wandered away. The weird thing is, I find their songs catchy and well-written, and they’re good live, but whenever I’m in their vicinity I get ADD.

In Hartford, I thought, maybe if I watch the band from side-stage, I will catch some of the energy. So during the immediately previous band (Bring Me The Horizon, for the record), I went backstage to see about getting up there, and was told by a bouncer that BMTH had too many people side-stage already and that I’d have to wait. So I waited, watching kid after kid get brought over to the first aid tent with bloody noses and lacerated scalps.

Near me, also waiting for the All-American Rejects, were two kids in wheelchairs as well as one girl who had clearly just recently gone through chemotherapy. One of the Warped roadies (I’m not sure what his job title is, but he’s always at the main stage) gave them some freebies and such, and then, after BMTH finished, he brought over Tyson, lead singer of the All American Rejects, to meet them.

All of the kids were excited to meet him, but one in particular lost his head a little bit. His face split into just about the biggest grin I’ve seen this summer thus far, and he gushed, “OH MY GOD I AM YOUR BIGGEST FAN.” Tyson was really nice, gave them some guitar pics, took pictures, signed autographs, thanked them for coming, etc. This kid was clearly having the absolute moment of his life.

I want to make really clear, what made this so fun for me to watch had nothing to do with any sort of “Awww, look at the noble gracious rock star making time for the poor unfortunate paraplegic child” crap. All three kids seemed like happy, well-adjusted, capable people. But there was some major elation going on in that kid’s face, elation that I remember feeling myself when I first met certain people (uh, hi Dicky Barrett, in retrospect that was probably kind of embarrassing), elation that–sad to say–I don’t see a whole lot of, at Warped Tour or anywhere else.

I still didn’t stick around to see the All American Rejects; there were so many people who wanted to get side-stage for them that I ended up leaving it for the people who would really enjoy it. (Also: props to the Warped staff [not the oblivious LiveNation Bouncer, but the stage crew] who made sure that the kids in wheelchairs, as well as a couple other people below average height, got on stage first and made sure they were in places they could see.) As I left, I could see the elated kid watching the All American Rejects. Even from 200 yards away, I could see him singing along to every single word through the happy grin that just wouldn’t come off his face.

What do you have in your life that makes you that happy? Why don’t you go do more of it?